Click here to edit the Social Media Links settings. This text will not be visible on the front end.

Head Up, Phone Down When Headed Back to School 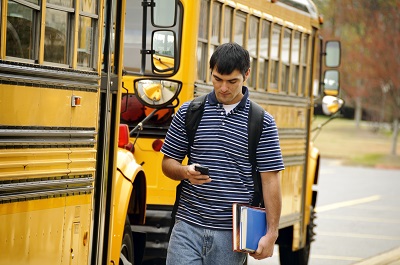 Summertime offers a nice reprieve from the constant shuffling of papers, carpools and heavy backpacks of the school year. But once fall rolls around again, parents and kids have a lot to juggle.

As your children march out the door on that first day of school – and every day – there is really only one priority: Nothing is more important than making sure they get home safely.

Back in 1995, children ages 5 to 9 were more at risk than any other age group under 19 for being struck by a vehicle while walking. The good news is, the death rate for kids of all ages in this category declined more than 50 percent in the last 20 years.

But there is much more work to be done. According to a study by SafeKids.org, 61 children are hit by cars every day in the United States, most often during the hours before and after school, and peaking in September. And, there has been a noticeable demographic shift. It is now much more likely a teenager will be hit by a car than his younger counterpart.

The injury and death rates for teens has leveled off over the years, but it has not improved significantly.

They Send How Many Texts??

With this knowledge, the National Safety Council is focused on efforts to eliminatedistracted walking – specifically walking while texting. According to a study by The Nielsen Company, kids age 13 to 17 send more than 3,400 texts a month. That’sseven messages every hour they are awake.

The kids in this video seem to validate those texting statistics.

Before your children head out, remind them of these year-round safety tips:

Not Only Kids Are Distracted

Drivers have a lot to pay attention to in school zones, too, and there is never an occasion that justifies using a phone while driving. One call or text can change everything.

A study conducted by the Centers for Disease Control revealed that the most common form of travel to school for students age 5 to 14 is the family car. That translates into a lot of cars in school zones at the same time. Eliminating all distractions is key to keeping children safe.

At the National Safety Council, we don’t believe in accidents. Please join us in doing everything you can to prevent senseless injuries and deaths.

Related Articles
Uncategorized Generous Windermere Agents Raised over $1,500,000 So Far This Year! Windermere Foundation Has Raised over $1,500,000 So Far This Year! Posted in Windermere Foundation by Christine Wood    Thanks to the generosity of Windermere agents and the community, the Windermere Foundation collected over $1,537,000 in donations through the third quarter of 2017. This is an increase of nine percent compared to this time last year! Individual contributions and fundraisers accounted […]
Uncategorized Follow these must-do fall maintenance tips to get your house in shape and help keep you warm this winter. With the arrival of fall home owners should consider following these helpful tips.  These recommendations will help the do-it yourself person in preparing your home for the winter months. http://www.diynetwork.com/how-to/maintenance-and-repair/repairing/autumn-maintenance-tips Regularly clean gutters and downspouts. Make sure all drainage areas are unblocked by leaves and debris. Consider installing gutter guards to make the job a […]
Uncategorized Studded snow tires are legal Oct. 1 in Idaho The month of October is starting to see snow accumulation in Idaho’s higher elevations which is prompting travelers to run studded snow tires. Another sign of winter – studded tires legal Oct. 1 in Idaho

Thank you for your inquiry.